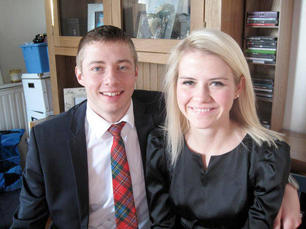 A summer wedding is planned, said Chris Thomas of the Salt Lake public relations firm Intrepid Group. Thomas would  neither identify Smart’s fiance nor confirm how the couple met. The pair became engaged this past weekend.

Sources, however, have identified him as Matthew Gilmour of Scotland.

Smart, 24, is “happy and excited for this next chapter in her life,” Thomas said. “She has planned to be very public in her child advocacy work but wants to keep the details of her personal life private.”

Elizabeth Smart’s father, Ed Smart, said he and his wife, Lois, are “just very happy for Elizabeth. He seems like a fine young man.”

Smart would not release additional details at the request of his daughter. “She feels he’s the one so we are very happy for her,” Ed Smart said Friday.

Smart rose to international prominence after she was kidnapped at knife point from her parents’ home in June 2002 by Brian David Mitchell. Smart, then 14, was held by her captors for nine months, enduring repeated sexual abuse. Smart was rescued when she, Mitchell and Mitchell’s wife, Wanda Barzee, were spotted in Sandy in March of 2003.

Smart testified against Mitchell, who was convicted of kidnapping and rape in U.S. District Court in 2010. He is serving a life sentence. Barzee is serving a 15-year sentence in federal prison for her role in the crimes.

Many people who watched Smart testify against Mitchell at trial and during sentencing commented on her poise and confidence on the witness stand.

Smart has said on a number of occasions that she has been guided by the advice of her mother, who told her the day after her rescue that Mitchell may have taken nine months of her life from her, but she must not allow him to take one more minute.

Smart has advised other victims “not to let it hold them back.”

Since her rescue, Smart has served a mission for The Church of Jesus Christ of Latter-day Saints in France, formed a foundation to advocate on behalf of children and has worked as commentator for ABC News.